“Last year’s Daytona 500 Grand National Winner, Marvin Panch, who copped first place in the automobile racing classic with a record 149.601 miles per hour poses with 1962 Dodge Dart which he will drive in this year’s race February 18th.“ 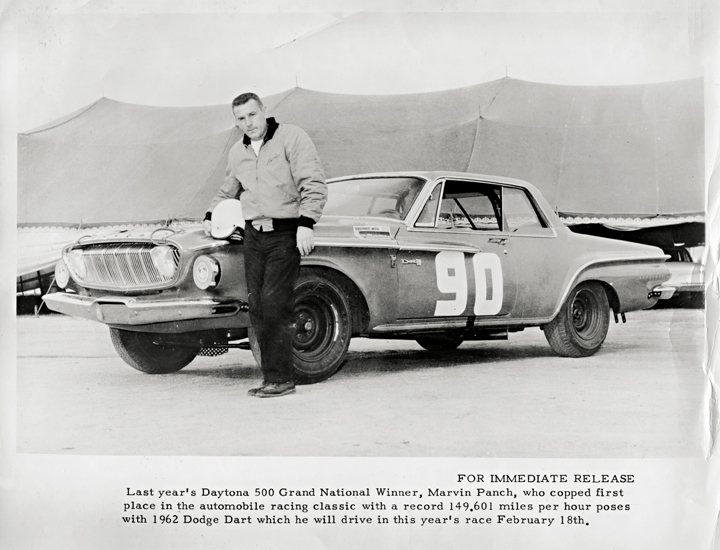 Watching the Daytona 500 last weekend got us thinking about past Daytona 500 races and some of the stars of the day that we have forgotten. A delve into the archive produced this image of NASCAR legend Marvin Panch alongside a rather ‘stock’ looking Pontiac.

“Pancho,” most well known for his 1961 Daytona 500 victory driving for Smokey Yunick, scored 17 victories in his 15 years of racing in the NASCAR series. Driving for Wood Brothers Racing from 1962-66, Panch also had 21 poles and 126 top ten finishes in his Cup Series racing career. He finished his career driving for Petty Enterprises.

Panch’s 1961 Daytona 500 win was his first victory in NASCAR’s top division since 1957, establishing what was then a speed record for a 500-mile race at 149.601 mph. This record pace was no doubt helped by the fact that, incredibly, the entire 500-mile race was run without a single caution flag period. The caution free event was one of only three times that the iconic race ran the entire distance under green, with 1959 and 1962 being the only other two times it occurred.

“I was just setting a steady pace,” Panch modestly explained to the Daytona Beach paper, hours after his victory in a year-old Pontiac Catalina, the only non-1962 car in the field. Marvin took the lead on lap 187 of the 200 lap race when pole sitter and race leader ‘Fireball’ Roberts suffered a blown engine, and completed the race on just one change of tires. This would be the first of just three victories for Pontiac in the legendary Daytona 500, Fireball Roberts took a much deserved win for Pontiac in 1962 and Cale Yarborough the only other victory for the marque in 1983.

Just two years after his historic victory, on February 14th, 1963 at Daytona International Speedway, Panch escaped death in a fiery crash, driving an experimental Ford-powered Maserati in a test session. He suffered serious internal injuries and severe burns to his back, neck and hands. Among his rescuers was a South Carolinian racer named Tiny Lund, who won the Carnegie Medal for heroism for his actions. “We just jumped in and gave him a hand,” Lund told the Daytona Beach News-Journal shortly after the crash. “Marvin would have done the same for us.” Just ten days later, Lund drove the Wood Brothers No. 21 entry earmarked for Panch, to his first premier series victory in the 1963 Daytona 500.

After a hospital stay of several weeks, Panch announced in late April that he would return from his injuries in June at Charlotte Motor Speedway’s annual 600-mile race. He closed the 1963 season with three pole positions, a victory at North Wilkesboro Speedway in September, and top-10 finishes in all 12 of his starts for the remainder of the year.

Panch concluded his final year of competition for a variety of car owners, scoring his final victory in the World 600 at Charlotte. He announced his retirement from the sport on Dec. 6, 1966 at age 40, telling The Spartanburg (S.C.) Herald that his only regret was not winning at Darlington Raceway, NASCAR’s first superspeedway. Panch ruled out a comeback attempt, even though he declared his health the best it had been since claiming his lone Daytona 500 triumph. “I don’t have much more to gain by racing,” he told the Spartanburg paper. “Actually, I’ve been thinking about quitting for about a year. Just waiting for the right time.”

In 1963 Panch was presented the Myers Brothers Award to honor his outstanding contributions to the sport of stock-car racing, in 1987 was inducted into the National Motorsports Press Association Hall of Fame and in 1998 he was named one of the top 50 drivers by NASCAR.

On Dec 31st 2015, following Panch’s death at the age of 89, NASCAR released the following statement. “For more than 60 years, Marvin Panch was a familiar and friendly face around NASCAR and Daytona Beach. He was one of the true pioneers of the sport, winning races across several NASCAR divisions, including the 1961 Daytona 500. As one of NASCAR’s 50 Greatest Drivers, he represented the sport with class both on and off the track. Marvin will be missed dearly, especially as we approach Speedweeks at Daytona International Speedway, where he was a fixture.”