The story of the Cortina Lotus began in 1961 when Colin Chapman commissioned Harry Mundy to design a twin-cam version of the Ford ‘Kent’ engine. Most of the development of the engine was done on the 997cc and 1,340cc Ford engine, but when in 1962 Ford released the 116E five bearing 1,499 cc engine, work centered on this. Keith Duckworth, from Cosworth, played an important part in developing the engine. The 1,499cc power unit first appeared in a production Lotus, the Elan in 1962, but it was soon replaced with a larger capacity 1,557cc unit. This was in order to get the car closer to the 1.6-litre capacity class in motorsport. While the engine was being developed, Walter Hayes of Ford asked Colin Chapman if he would fit the engine into 1,000 Ford saloons (sedans) for Group 2 homologation. 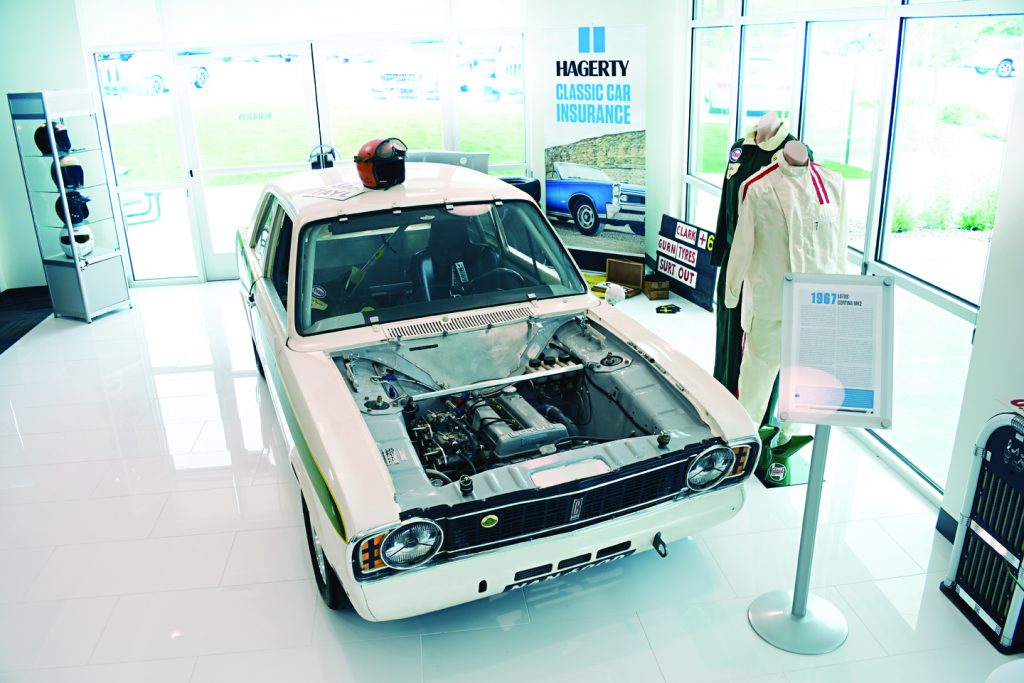 Chapman quickly accepted, and the Lotus Type 28 or Lotus Cortina or Cortina Lotus (as Ford liked to call it) was launched in 1963. Ford supplied the 2-door Cortina bodyshells and took care of all the marketing and selling of the cars, whilst Lotus did all the mechanical and cosmetic changes. The major changes involved installing the 1,558cc engine, together with the same close-ratio gearbox as the Elan. The rear suspension was drastically altered and lightweight alloy panels were used for doors, bonnet (hood) and boot (trunk). Lightweight casings were fitted to gearbox and differential.

All the Lotus factory cars were painted white with a green stripe (although Ford built some for racing in red, and one customer had a dark blue stripe due to being superstitious about green). The cars also received front quarter bumpers and round Lotus badges were fitted to rear wings and to the radiator grille. Ford wanted to change a few things on the Lotus version of the new Mk2 Cortina that was to be launched in 1966. The Mk1 had done all and more than they could expect in competition, but the public linked its competition wins with Lotus and its bad points with Ford.

Ford still wanted to build a Mk2 Lotus and compete with it, but Lotus were fully occupied with their move from Cheshunt to Hethel, so a decision was made at Ford that to continue with production themselves. To make the car more cost effective they would make the car at Dagenham, alongside the other Cortinas. So that it could be made alongside Mk2 GT production, The Mk2 needed to be easier to build than the Mk1 and was pretty much a GT with not much more than a different engine and suspension. The Lotus edition of the Mk2 took a while to appear, first appearing in 1967. The only cosmetic changes made from the GT were a black front grille, 5.5×13 steel wheels (The Mk2 was a wider car than the Mk1, so although they looked the same, the steel wheels had a different offset so as not to upset the tracking, and radial tyres were now standard) and Lotus badges on rear wings and by the rear number plate. Only a few months after production started, the Lotus badge on the rear panel was cancelled and a new TWIN CAM badge was fitted under the Cortina script on the boot lid. Unlike the Mk1, the Mk2 was also made in left hand drive from the start of production.

The Mk2 Cortina Lotus also gained an improved and more powerful (109bhp) engine, the gearbox remained the same but the car now used the Mk2 GT remote-control gearchange. Another attraction was the larger fuel tank. The spare wheel could now be mounted in its wheel well, but the battery remained in the boot to aid weight distribution. The only real difference to the engine bay was the air cleaner mounted on top of the engine. The interior was almost identical to a GT, and the Mk2 did exactly what Ford wanted, it was far more reliable whilst still quick enough to be used in competition, until it was replaced by the Escort Twin Cam. The Mk2 Lotus Cortina stayed in production until 1970. In 1967, the works Lotus race team ran a pair of Mk2 Cortinas in the British Saloon Car Championship.

Driven by F1 drivers Graham Hill, Jacky Ickx and Paul Hawkins, the cars ran with a special fuel-injected engine and were always spectacular. The 1967 Lotus-Cortina Mk2 racecar on display this month was built up from a genuine Lotus Cortina street car by Denver based race team 3R in 1998 and is raced by owner and Lotus expert William Taylor in local Vintage race events when time permits. The fully developed and lightened car develops around 175bhp from its full-race engine.